How to Create a Successfully Funded Kickstarter

Last night, Arts For Colorado hosted a Kickstarter workshop in Denver featuring Stephanie Pereira, Kickstarter’s International & Civic Partnerships Lead. Also presenting at the event were Brigid McAuliffe and Robert Rhu, two local artists who had successfully funded their Kickstarter campaigns. We had an overwhelming turnout, over 50 people in attendance! It looks like everyone wanted to know more about this amazing crowd funding website. We learned a ton from all of the speakers and the questions that were asked sparked great conversations during and after the event.

In order to continue hosting free workshops like these, it is crucial that Arts For Colorado gets the support it needs. If you can, please donate to our cause here or to become a member, visit us at our member page.

To fill you in on some of the things we learned from Stephanie and the presenters, we’ve enlisted the help of professional blogger Monika McMahon who was in attendance, here’s what she had to say:

How to Create a Successfully Funded Kickstarter

First off, let me say that while I have never launched my own personal Kickstarter (I’ve definitely thought about it), I have always been a supporter of local artists who have and I was excited at the opportunity to learn more about this platform. For those of you that don’t know anything (or much) about Kickstarter, I’ll start off with the basics and some rough statistics from Stephanie Pereira. What is Kickstarter?Kickstarter is a platform that gives you the opportunity to bring a creative project to life by allowing friends, family, fans and others to fund your creative projects. While causes, charities and nonprofits are not allowed to use Kickstarter for donations, they can use Kickstarter to fund a creative project. Kickstarter has been around for 5 years and was developed by 3 creative guys – an artist, a musician and a designer. StatisticsSteph rattled off a bunch of impressive, rough stats about Kickstarter at the beginning of her presentation:

As Steph rattled off stat after stat, she also included many tips for helping make a Kickstarter project a success:

Tips For a Successful Kickstarter from Steph

Then Steph interviewed both Brigid and Robert about their projects, including the good, the bad and the ugly.

Brigid – Picture.Me.Here.Brigid works with refugees here in Denver and a theme that kept coming up was that these refugees didn’t know how to use cameras as they didn’t have them in the refugee camps back in Nepal. She decided to take a trip down there with 2 other co-workers to give these camps cameras and teach them how to use them. Brigid was looking to raise $12,000 which would cover travel, lodging and cameras/supplies for these refugee camps. They raised over $12,000 and in April were able to go to Nepal for over 2 weeks to teach refugees how to use these cameras as well as how to tell a story using images. Tips and insight from Brigid

Since Brigid had a successful campaign, here are some great takeaways and tips from what she learned:

Robert – The Story Portal
Robert and his friends set out to build a Steam Punk style, portable game that looked similar to the Price is Right but instead landed on a theme that the person on stage then had to tell a story about. They created the campaign with the idea that they would travel with it to different festivals all over the US to play with their attendees.

Tips and Insight from Robert
And here is what Robert learned from his successful Kickstarter:

Of course this event took place the same week as the whole Potato Salad debacle, so there were quite a few references and questions about it directed toward Steph. The big question, how did Potato Salad get approved/launched? Last month Kickstarter updated their policies and decided they will no longer approve each campaign. With that change also came a change in language over what was allowed to launch: “Create something to share with others,” which technically Potato Salad dude isn’t violating, hence the reason it is still up and collecting funds.

Still have questions about Kickstarter or how to get started? Leave us a comment and we’ll do our best to answer, because believe it or not, this was only 1/2 of Monika’s notes on the event! If her notes don’t answer your question, we may have to email Steph for the answer, but we’re happy to help! 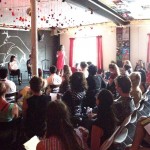 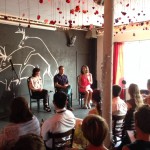 Monika McMahon is a professional blogger and music enthusiast. She is a Spokesbuzz board member and is actively involved in advocating for music and arts around the state. You can visit here blog here, or follow her on Twitter.
—
In order to continue hosting free workshops like these, it is crucial that Arts For Colorado gets the support it needs. If you can, please donate to our cause here or to become a member, visit us at our member page. Thank you!
Take Action Now! Find your Legislator
Follow @artsforcolorado