Matt Wilson of MASSCreative at The District

On Monday September 21st, 2015, Arts for Colorado invited art advocates to attend a cocktail hour at The District to hear Matt Wilson of MASSCreative speak on the arts and creative economy in Massachusetts.

Founded in 2012, MASSCreative works with creative leaders and entrepreneurs, working artists, arts educators, and arts and cultural supporters to empower creative organizations and the public with a powerful voice to advocate for the resources and support necessary to build vibrant and connected communities.

Arts, culture and creativity can build vibrant communities through their powerful impact. Through their many achievements since 2012, MASSCreative has three signature accomplishments that have allowed their surrounding arts communities to flourish in new and powerful ways:

The city of Boston has hired a Commissioner of the Arts and has led to a cultural planning process that will eventually see the arts incorporated into all higher-level planning for the city of Boston. With this and other initiatives, MASSCreative has established three ways they will lead the arts and cultural community to a new level of political power and relevance across the Commonwealth.

MASSCreative continues to advocate for creativity and make it known that the arts matter. For more information, please visit their website at http://www.mass-creative.org/. 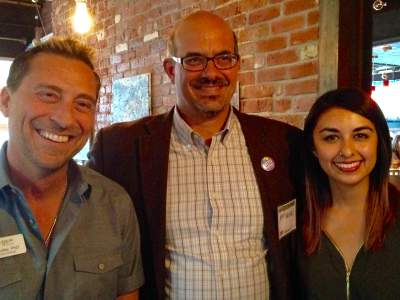 Jay Seller of Think 360 Arts, Matt Wilson of MASSCreative and Janae De La Virgen of Arts for Colorado and WESTAF.

A huge thank you to Matt Wilson, The District, and all of our attendees!